In wire harness manufacturing no single process is more important than the terminal crimping.  But how do you know you have a good crimp? Well there are several ways we’ll show you but in the end there are two end goals; Low electrical resistance in the crimp joint and strong mechanical strength of the joint. 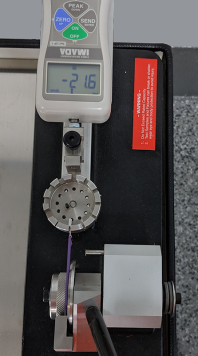 The pull force test is one of the most basic tests you can perform on a crimp joint, it involves securing the terminal to some sort of fixture and then clamping the wire and pulling it with constant speed to measure the maximum force applied before the wire breaks or the crimp fails.  This result is then compared to industry standards such as UL486 (an example would be an 18AWG wire should be able to withstand a minimum of 20lbs of pull force on the conductor crimp). This test is performed normally on the conductor crimp only, if you have a insulator crimp it should be disabled to get accurate results.  This test is great except for one thing, it is destructive, you are testing until failure, even if you stop at the minimum specs you have put strain into the assembly and it would be very time consuming to do this for every crimp anyways so it is really used more often as a setup test and a spot check during a production run.

Another test that can be performed is a crimp height measurement.  Once a good crimp is established and proven out with other methods you can measure the total crimp height for the specific terminal, wire, and tooling combination to use as a reference value.  Then subsequent crimps can also be measured and compared to the initial value to determine if the crimp was properly set. The crimp height measurement will identify tooling wear, setup mistakes, or press inconsistency, it is also non destructive, which can be great for spot testing a production run without scrapping materials, however it is time consuming and not easily automated without expensive camera based systems.  Crimp height measurements also require some amount of operator skill to get consistent results so some training is required to get the most out of it.

Cross section analysis is most often used as part of a final setup verification or to diagnose problems with a setup.  This is where the crimp is cut in half to show a cross section of the crimp. This area is then polished up and put under a microscope to check for wire strand compression, look for voids in the crimp, and verify the crimp flags aren’t contacting the floor of the terminal.  Cross section analysis is a destructive and time consuming test, often times only used to validate a completely new setup or to understand what might have happened to an old setup that is no longer meeting specifications.

Crimp force monitoring is now widely used in industry as it allows for fast, automatic testing of every single crimp in a production run.  Crimp force monitoring (CFM) basically graphs the force vs time profile during a crimp cycle and compares that to a known standard. CFM can detect all sorts of faults such as a broken wire strand, a missing wire strand from the crimp area, an improperly stripped insulator, a missing weather seal, worn tooling, improper setup, incorrect wire material, and incorrect terminals loaded.  And because it happens during the crimp without any intervention from the operator it does not require any additional time at all to perform and can automatically alarm out the operator, or trigger a scrap call in an automated machine so that bad parts are never used in production. The CFM system does however rely on the operator already having a known good setup that was validated using other methods.  The system just compares it’s known good sample data to the current crimp data, it can not aid in initial setup.

Putting it all together, the Terminal Crimp Quality Control Process

Given all the tools at our disposal, this is how we typically setup and then monitor our crimp process.

While the process may seem involved it’s important to remember just how dependent your product is on the wire harness performing correctly under a variety of variables; vibration, chemicals, strain and stress, flex, and other non-ideal conditions.  The end product is only as good as the wiring connecting it all and for reliable performance these quality standards are absolutely necessary. Modern equipment is covered in electronic systems and wire harness quality standards are more important than ever.  As always, thanks for spending a minute with us today, and let us know if you have any crimp quality questions we can help with!